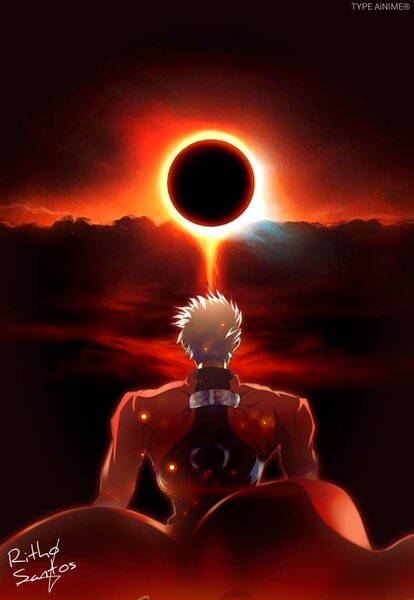 iOrbix Quest
ᴄᴏᴜɴᴛᴇʀ ɢᴜᴀʀᴅɪᴀɴ is using iOrbix.
Join iOrbix today!
This account is a Fan Profile or Fictional Profile.
A fictional profile either does not belong to a real person, or is a fan profile of a celebrity.

So long as I can help others, that's all that matters...
Age: 103
Gender: Male
Status: In a Relationship
Location: Japan
Timeline
Basic Info 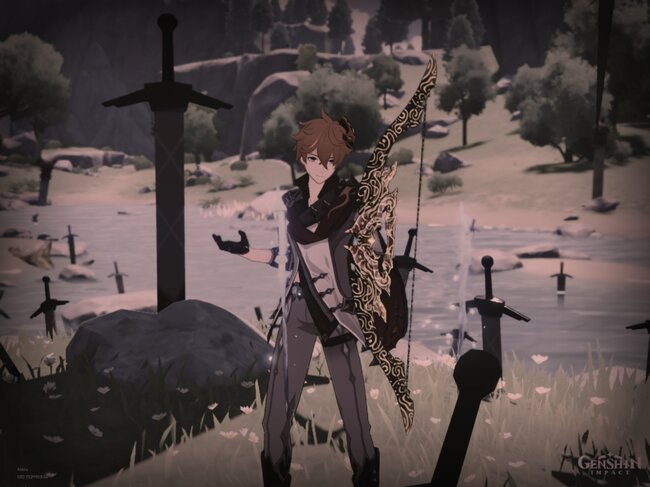 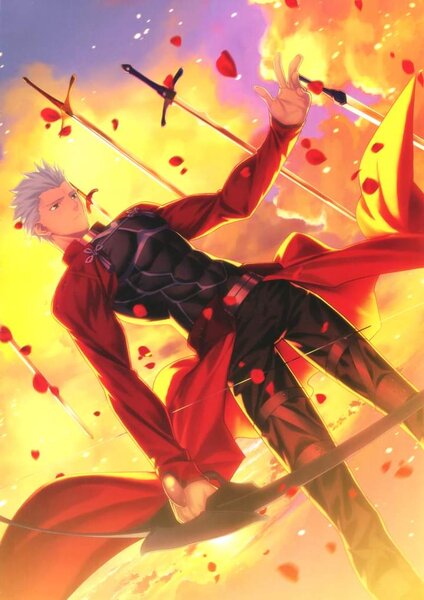 Class Skills:
Independent Action [B]
It is the ability to remain independent even when rejecting the Magical Energy supply from one's Master; the ability that allows for action even in the absence of the Master.[1][12] At higher ranks, it is also possible to remain for extended periods of time in this world without an established contract. It is both useful and troublesome depending on the disposition of the Servant and the rank of Independent Action. Acting in autonomy from the Master's Magical Energy supply, the Master can concentrate their own Magical Energy on large spells, or the Servant will be fine even in the case they cannot supply Magical Energy due to injury. The downside is that they can be harder to control and keep by their side, making the only true way to command them is by utilizing Command Spells.
Magic Resistance [D]


Personal Skills:
Clairvoyance [C]
Clairvoyance (透視能力, Tōshinōryoku?) is the ability to flawlessly perceive and observe the world around them; objects, people, locations, events, with one's mind, with no mistakes and 100% accuracy.

Eye of the Mind (True) [B]
It's a danger-avoidance ability that utilizes the intelligence collected up to the current time as the basis to predict the opponent’s activity and change the current situation. Servants like Lancer and Saber cannot be matched in direct combat under normal circumstances. They are too fast and strong for him to last more than a few blows before falling to their strength, should he take them on without any strategy. He reads the oncoming attacks and counterattacks ahead of time, constantly thinking tens of steps ahead in order continuously prolong his survival by seconds in avoiding blows, parrying, and striking back without being overwhelmed.

It is "combat logic" that utilizes calm analysis to take information obtained from the current situation and enemy's abilities to make predictions, and makes use of his cultivated battle experience to plan his attack. In spite of danger, he takes consideration of all possible actions in a particular situation, and if there is even a one percent chance of a comeback, the ability improves the chances of success. Although superior to Shirou, the circumstances of their battle lead to Archer being unable to see through Shirou's "passion-infused strike which puts 'ideal' on the line", and he ultimately is struck by it. He does not to answer as to why he did not block an attack he should have been able to easily block, and it is possible he does not know the answer.

Magecraft [C]
Although classified under the Archer class, he was not a swordsman nor an archer in life, but a magus at his core relying on his one spell, Unlimited Blade Works, to fight. Despite being a skilled combatant, his true unique strength lies within the manufacturing of weapons rather than their use. His abilities in life were unremarkable overall, utilizing Reinforcement with difficulty and the "structural analysis" step of projection more often than anything else.


Projection Magic [A]
Only Projection had any worth, having granted him the many Noble Phantasms and combat skills they hold. Aside from Projection, he can also use magic detection and magic resistance, which are considered very basic. He does not posses the ability to utilize offensive magecraft that work around the lines of nature interference. His dark skin, white hair, and gray eyes are a side effect of extensively using Projection Magecraft.


Hawkeye [B+]
Visual ability that affects the accuracy of bows, allows him to execute his "ultra long-range sniping" precisely even against targets moving at high speeds as long as they are within a four kilometer range. With accuracy transcending the realm of men, it is an ability often used for scouting that is able to fully survey the town simply upon looking down from a high location. Utilizing the "must-have ability" of the Archer class, such strikes greatly differ from his regular arrows, and they are a means to certainly kill the opponent. Differing from his former Japanese shooting method, nocking the arrow in the palm of the left hand, Archer utilizes the traditional European method of nocking the arrow over the back of the left hand.[19] He is skilled enough to mark two enemies and fire a single arrow with the intention of striking both, surpassing the normal rules being unable to alter its course.


Noble Phantasm:
Unlimited Blade Works [E-A++]
is the Reality Marble of Shirou Emiya and the Noble Phantasm of the Heroic Spirit EMIYA and his Fate/EXTRA counterpart. EMIYA does not have a true Noble Phantasm that is the crystallized embodiment of a hero's existence like many demonic or holy swords, but if a Noble Phantasm is considered to be a symbol of the Heroic Spirit, then the Reality Marble is his Noble Phantasm. It is a high-class thaumaturgy that embodies their internal worlds and imprints them upon the World as a Bounded Field for a short amount of time. It is their one true specialization of magecraft, the result of "Sword" being both their Origin and their Elemental Affinity, and the basis of their projection and reinforcement skills. It is the definite answer obtained by someone whose life was saved by a sword, actually merged and lived with a sword, and acted as a sword all of his life.


Archer's True Name is EMIYA (エミヤ?), Shirou Emiya. He is not a proper Heroic Spirit in the sense of other heroes.[3] He is an alternate version of Shirou from an alternate timeline of Fate/stay night where he made a contract with the World (Alaya) and became the Heroic Spirit EMIYA. He acts as a Counter Guardian for the world as payment for the contract. About Me

Affection of the Holy Grail [A+]
Affections of the Holy Grail (聖杯の寵愛, Seihao no Chōai?) is his Personal Skill, a Skill for one who is deeply loved by a Holy Grail, in some time and place. One could call it the greatest curse in the world. This Skill boosts the rank of his LCK. Under special circumstances, he can even break out of enemy Servant abilities that would normally be impossible to escape from. However, this good fortune comes at the merciless expense of others’ happiness.[2] He himself is not aware of the existence of this Skill, and he occassionally hears the 'voices' whispered from the Holy Grail.

Scapegoat [C]
It's the accumulation of cunning techniques designed to escape the battlefield in one piece.

Noble Phantasm:
Chronos Rose [B -> B+]
Chronos Rose: Gather Ye Rosebuds While Ye May (時のある間に薔薇を摘め, Toki no Aru Aida ni Bara wo Tsume?) is the Noble Phantasm of the Counter Guardian EMIYA based on the unique Innate Time Control (Time Alter) ability of Kiritsugu Emiya that he had possessed in life as a technique improved for combat, sublimated into a Noble Phantasm. Based upon his personal variation of Time Manipulation, his family line's magical research that was transmitted to him, it allows him to control his inner flow of time, utilizing high-speed attacks and maneuvers by accelerating the flow of time, and concealing himself by slowing time to stagnate his biorhythms. With it possessing power as a Noble Phantasm, he is able to utilize extreme consecutive attacks to the point where he can be described as being invincible in anti-personnel combat

Phantasm Punishment [C+]
Phantasm Punishment: Mystery Bisection (神秘轢断, Shinpi Rekidan?) is Kiritsugu Emiya's Origin that has the double attribute of "Severing and Binding", its power put into a knife and sublimated as a Noble Phantasm of the Counter Guardian EMIYA. It is the same knife he uses for his usual time manipulation attacks, his Origin made form and the knife being the embodiment of it.[1] It inflicts fatal damage towards enemies that possesses magic circuits and magic crests or anything similar inside their bodies. The ability is invoked according to its True Name release.


Assassin's True Name is EMIYA (エミヤ?), Kiritsugu Emiya. An assassin who was incarnated as an agent of the Counter Force. Originally, he was not a Heroic Spirit. Although he was an individual who murdered many people as an assassin, his existence has not been engraved in the Throne of Heroes. One of the “imitation Heroic Spirits” also referred to as Counter Guardians, and someone who would have never existed in the proper human history. Yet, this "if that might have been" possibility exists now only due to the threat that attempts to destroy human history itself from its very foundation... in the Grand Order case alone. His soul was called out from the circle of deterrence in response to this threat.

EMIYA has little emotions, an authentic battle machine. He kills his targets promptly, without hesitation, and without losing his way. His personality is closer to his adolscent years; his way of being is the adolscent Emiya Kiritsugu himself. Speaking of that again, his spirit is close to the time immediately following him having personally killed his mentor Natalia Kaminski as the "Magus Killer". Consequentially, his heart of steel remained as steel, his emotions eventually withering away completely.

EMIYA exists with no personal motive for he exists as an agent of deterrence. Strictly speaking, succeeding in restorating the Human Order is surely the purpose of his actions. Towards the Master, he boldly speaks out that they will be "unable to cooperate", and it may not become known that the reason he says that is because he extremely does not prefer to be on a united front. Although, by any chance that there is a possiblity for them to deepen their bonds, it seems he will express words different from what he usually speaks.