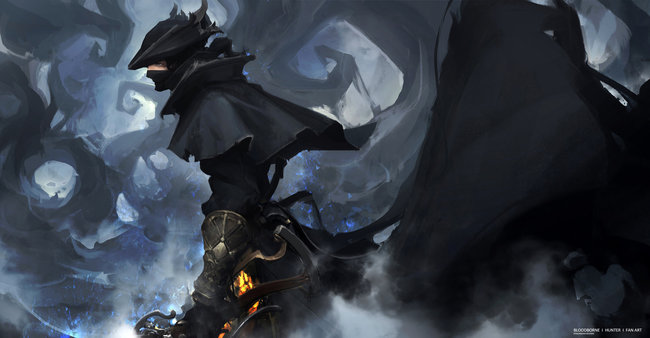 iOrbix Quest
Old Hunter Locke is using iOrbix.
Join iOrbix today!
This account is a Fan Profile or Fictional Profile.
A fictional profile either does not belong to a real person, or is a fan profile of a celebrity.

https://iorbix.com/bloodmoon-bastard
Basic
Gender: Male
Status: In a Relationship
Religion: Other


Personality:
An ingrate asshole with one of the foulest mouths you've ever met, Locke is a creature of a singular purpose: the slaying of those celestial beings incomprehensible to mere men known as the Great Ones and all their kin, Elder or otherwise.. Prone to fits of rage and bouts of frenzy, Locke is very much under control compared to the earlier days of his Great Hunt. There is always a seriousness about him, born of an extreme desire for control over himself and his environment as he knows what truly lurks in the depths of his own perturbed mind. He can be quite impatient, a trait inherited from his stepfather, and rarely feels the need to explain himself or his actions. He considers his Hunt to be above all else, and will do whatever is necessary to achieve his own corrupt agenda. While he knows the value of cooperation, it doesn't mean he'll enjoy it nor does he believe that it garners any sort of need to be any nicer. He's a dick and will usually laugh at others' misfortune.

Appearance:
Pale of skin and dark of hair, his most stand out feature are his piercing green eyes that appear to glow in the dark, though at times they are corrupt with an evil yellow tinge, a sign of frenzy. When he is completely consumed his eyes will go completely red and his usually well cultivated beard will grow along with the rest of his body hair, which is common along his sculpted chest. He's fit, having fight through the entirety of his harsh life which has bestowed upon him dozens of hellish scars.

Locke still cares and maintains the uniform he received from Gehrman when he became a Hunter; a white shirt and dark vest, covered by a long overcoat that drifted down his body nearly to his booted ankles. As with the majority of his ilk he wears a three pointed feathered hat. It's always clean, aside for a few blood stains which resist valorously against all scrubbing, unless he's been hunting, in which case expect him to be drenched in blood and reeking of death. He usually wears a sash and at times lifts his scarf over his face as a mask, which is an old habit from the days that Hunters weren't supposed to be recognized in public in Old Yharnam.

A bastard born and bred; Locke was the product of his mother's betrayal of her husband, a Byrgenwerth Scholar, and a wandering Hunter named Baxter. The child knew little of patience and love as he grew up under his step-father's cruel tutelage which began at the tender age of six, when he was dragged from his mother, whom was never to be seen again. Training was more akin to torture, as he was constantly injected with different variants of blood and experimented on by his stepfather and his colleagues. He survived, miraculously, whereas the rest died, and in exchange he was gifted with incredible abilities. Though Locke's step father was unpleased, he let his colleagues send the young boy to Gehrman,to be trained as a Hunter.

For many years Locke drifted between the two, learning all he could at both Byrgenwerth and under Gehrman. He was one of the Hunters that Gehrman took with him to the Fishing Hamlet, where he participated in the slaughter and first began to achieve a greater insight into the realities of this world. All he had learned from the Scholars was true, the Great Ones, celestial beings that corrupted the minds of men were true... and they were as despicable as he'd imagined. He hated what he saw and hated even more those that could not see, and thus took it upon himself to betray the School that had raised him. He changed his allegiance to Cainhurst, taking with him samples of all that the Scholars were studying.

Locke was greatly honored by the Vileblood Queen Analisse, being gifted with one of her cousins to take as wife, the sister of the famed Hunter which Locke had fought alongside in The Fishing Hamlet, Lady Maria of the Astral Clocktower. He sired three children with Lady Susan; Theodore, Seth and Samantha. Truth be told he was not a very loving father and was consequentially, due to his own upbringing, rather rough and unforgiving of mistakes they made. Nonetheless, they would all grow to become fierce warriors... though Locke never had the pleasure of witnessing it.

Not long after the birth of his daughter, Locke encountered a strange man named Benem D'Qorvos. He told Locke that a great invasion was coming, that the Great Ones would soon arrive in droves his world and that Kos was not the first, and that there would be many more to come. Locke had expected this, or something like this, a conclusion he had previously derived from his own studies, and was about to unceremoniously end the intruder's life when D'Qorvos told him of a door that lead to other worlds, where the Great Ones currently resided; where he could slay them before they even reached his own world.

The fire in Locke's blood was alight; he agreed to D'Qorvos' proposal and abandoned Cainhurst, his family and everything he knew to travel the cosmos in search for these Great Ones, slaying each and every fucking God he can find.

Lock is unsure how much time has passed since he went through that door, nor does he think often of it. He just doesn’t care, his past is dead for all he cares. He lost his mind long ago, and with each Great One he find his madness deepens, his lust for blood grows, and he becomes one step closer to simply being another blood-drunk hunter….