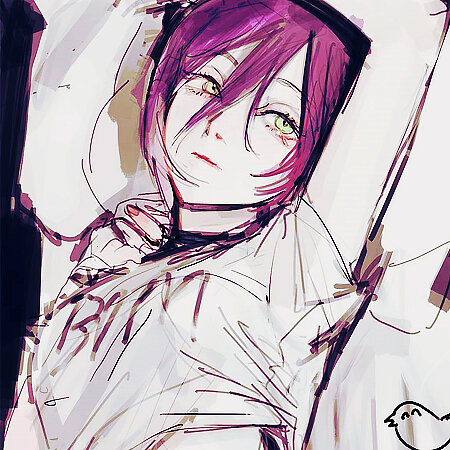 iOrbix Quest
Rᴇᴢᴇ ᴰᵉᵛᶦˡ ᴮᵒᵐᵇ is using iOrbix.
Join iOrbix today!
This account is a Fan Profile or Fictional Profile.
A fictional profile either does not belong to a real person, or is a fan profile of a celebrity.

Social
Looking to: Look Around
Sexual Orientation: Bisexual
Drinker: No
Smoker: No

Reze (レゼ), also known as Lady Reze, is a Bomb Devil hybrid from the Soviet Union and ally to the Gun Devil. She is the primary antagonist of the titular Bomb Girl arc. Reze is a teenage girl of slender build. She has shoulder-length black hair and emerald-green eyes that resemble a feline's. She is shown to be prone to blushing heavily. While posing as a civilian, she is seen wearing a choker in order to conceal the grenade pin in her neck, which she uses to transform. In her debut appearance she wore a loose shirt with stylized drawing of a bell on the front, and a backpack. While working at the café Crossroads she wears an apron.

Her transformation is that of a black airship-shaped head with multiple fins on the end, resembling the atomic bombs. Consistent with other hybrid transformations, her teeth are always visible and are notably sharp and angular. Bomb fuses cover her arms like sleeves while also making up a portion of her apron along with sticks of dynamite.

Reze initially appears to be a kind and gentle girl who has a crush on Denji soon after meeting him. She laughs at his jokes and isn't afraid to get close to and intimate with him. She shows little respect towards the owner of the café she works at, calling him a cheapskate for docking her pay. Her true personality is manipulative and brutal, as she is shown killing many Devil Hunters without care or mercy. She does, however, not enjoy killing and prefers to avoid it, unless necessary for her mission.